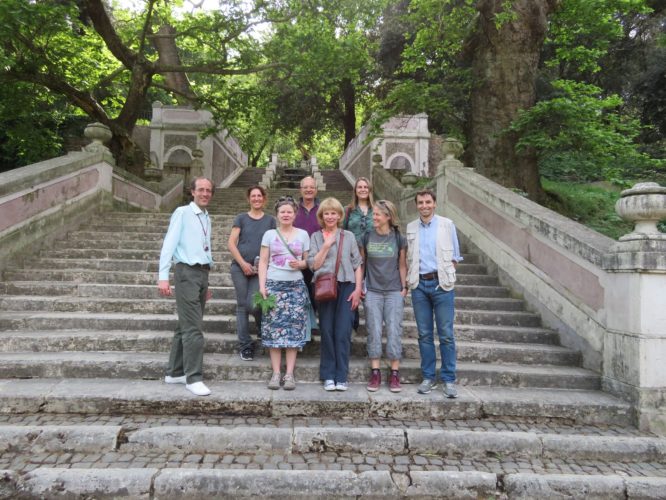 The good thing about a botanical exchange is that you have a common language – the language of plant names. So even if there’s confusion between English & Italian – like thinking the airport’s full of cows, when actually it’s full of chaos – you’re OK when you get to the gardens.

I visited Rome with our two gardeners, Sarah & Cath, at the end of April as the first stage of our partnership funded by Botanic Gardens Conservation International (BGCI). We learnt a huge amount in a few days, thanks to the great schedule of garden visits arranged for us by our partners in Rome. We hope that a combination of this visit and of their visit to us in June will go a long way towards the partnership’s aims of international plant conservation and botanic garden capacity building.

The highlights of the trip for me were the visits to the Botanic Garden of Rome itself and to the remote Ninfa Garden, about 40 miles away (just off the ancient Appian Way, with its beautiful lines of umbrella pines).

The Botanic Garden is in the ex-garden of the 16th-century palace of the aristocratic Corsini family, so like the SLBI has an important historic heritage. It has an amazing 2000 species of plant – including the national collection of palms, bamboos, pines and roses. They’ve just planted a ‘vineyard’ of 200 different native varieties of vine – unlikely to produce wine, but just to demonstrate the different types. The Japanese garden was beautiful, with its Acers and pond. We spent a lot of time in their greenhouses (including a beautifully ornate French one), comparing them to our own and seeing what we might add from their collection of haworthia (they have 200 species – two thirds of the genus), succulents, cacti, carnivorous, lithops etc. Some of their research sounds fascinating, like studying the photosynthesis of the Wollemi Pine.

The garden is part of the Sapienza University, so is very much a place for learning – no cafes, shops or such like – and although they charge an entry fee and operate on a much larger scale, they face similar challenges to the SLBI in terms of fundraising. We talked a lot about the activities we put on, such as talks and workshops, and also the great value of our volunteers. Visitor interpretation was also debated, as we look to improve our garden signage. 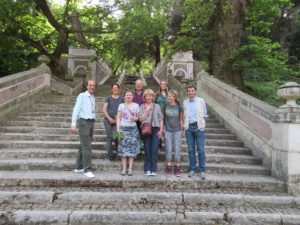 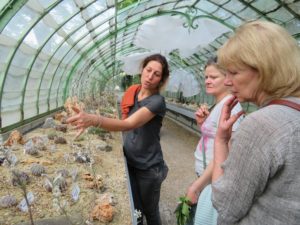 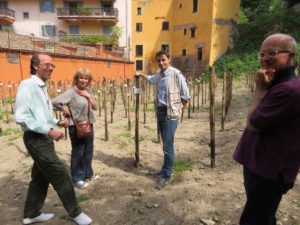 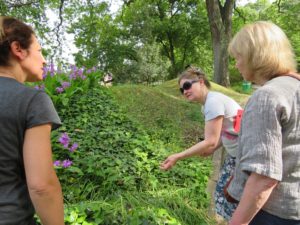 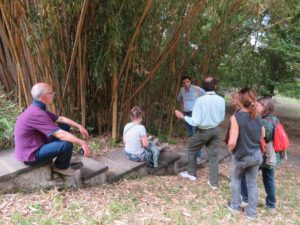 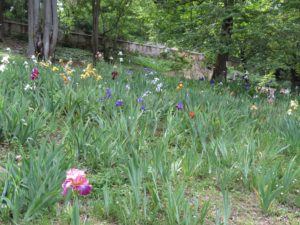 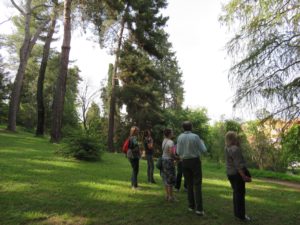 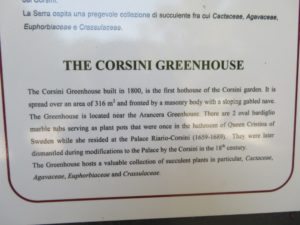 Ninfa was a different kettle of fish – the rambling ruins of an abandoned medieval village, covered in 400 varieties of rose. Streams are full of Canna lilies, bridges are covered in wisteria and a line of banana palms grows strangely next to a very English-looking border. The influence of the English wife of the owning Duke in the 1900s is very apparent, but it still feels more Italian than English (possibly because of the blazing hot sun…). The whole garden is pesticide free – they claim to have no aphids thanks to the natural methods started 100 years ago – and an organic farm and wildlife reserve outside the garden act as a buffer zone. 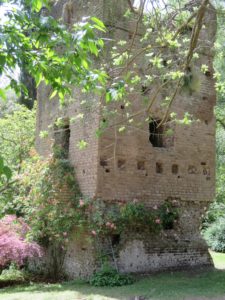 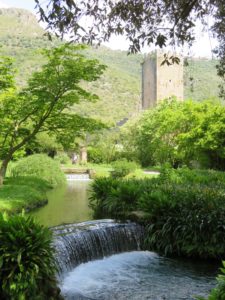 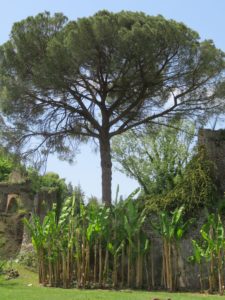 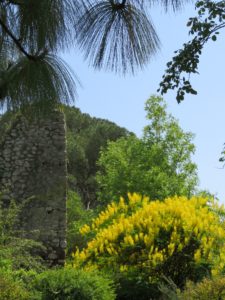 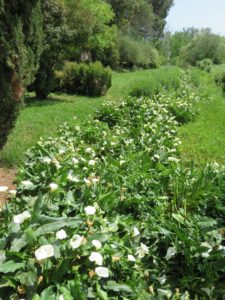 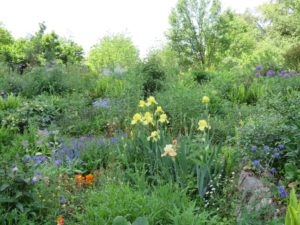 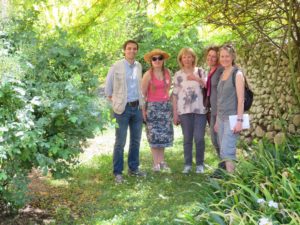 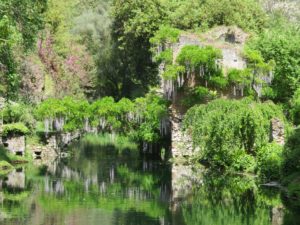 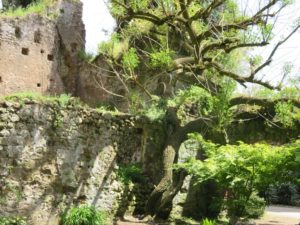 We were very lucky too to have a private tour of the President’s Quirinale Palace (I wondered about copying some of its frescos and floor mosaics for our new herbarium…?) and its formal garden of pines, palms, fountains etc. We also had a good look around Villa Torlonia, where our Roman friends were participating in the worldwide City Nature Challenge 2018 – a citizen science project in which people photograph as many different species as they can, over a specific weekend (I don’t feel bad participating in Rome, instead of London, as London still came ahead on the leaderboard…) 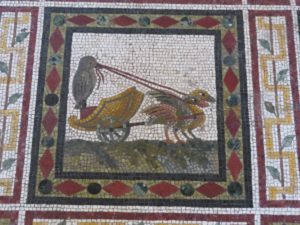 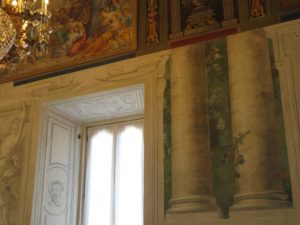 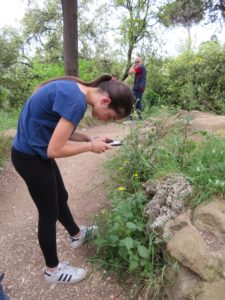 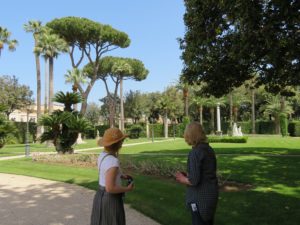 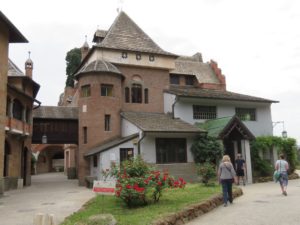 I could go on, but that’s probably enough. We did a fair amount of botanising on our way to and from gardens too – I know Cath particularly enjoyed the weeds on the neglected river bank, I was interested in green roofs and even a traffic jam on the way back from Ninfa provided opportunities. We also spent any small amount of free time in nearby green spaces, seeing what we could find, what we could learn and what we might be able to add to the SLBI collection.

For me it was also a useful reminder of why the SLBI and other botanic gardens exist, in terms of our role in international plant conservation, education and dealing with climate change – it’s sometimes easy to forget, when you’re dealing with the day-to-day issues. I was interested to find that one of my Roman colleagues has, like me, previously worked in countries such as Yemen and South Africa – countries which have felt the effects of climate change far more dramatically than we have here in Europe. 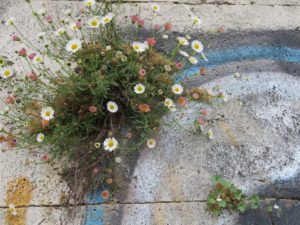 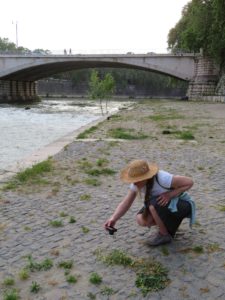 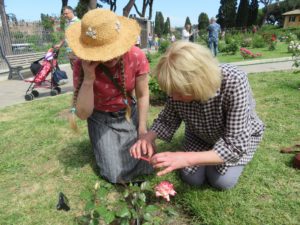 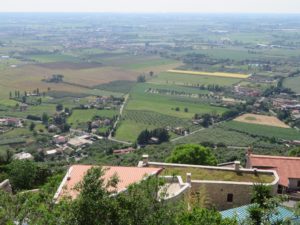 We’re very much looking forward to the Romans coming to us in June, showing them the SLBI and some other London gardens, and continuing our discussions. We’ll also probably continue our very important debate about whether we should say ‘ginkgo’ as in ‘begin’ (as we’ve always done) or ‘ginkgo’ as in gin & tonic….

Our thanks again to the BGCI for setting up and supporting this partnership.