Enjoy a tour of our garden if you’re unable to visit us! Sarah Davey, Head Gardener, has filmed several tours during the lockdowns of 2020/21.

The botanic garden, hidden behind the Institute, has an atmosphere of green profusion. It is approached though a small conservatory which shelters tender plants in winter, and houses a collection of carnivorous plants. The latter double their grisly fascination – and beauty – when viewed though a microscope. 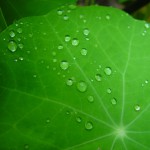 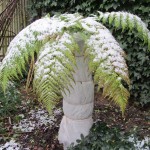 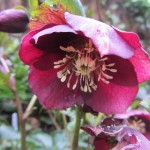 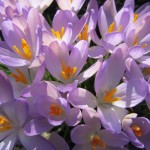 Densely planted, themed borders are formally laid out and separated by a grid of paved paths. The space is compact (24m x 16m), but the garden contains over 500 labelled species.

A selection of plants recorded by John Gerard of Holborn in his ‘Herball’ of 1596. Herbalists were the GPs of the day, prescribing these plants for a number of Tudor ailments, recommending the ingestion of the root of Angelica archangelica, ‘a singular remedie against poison, the plague and all infections taken by evill and corrupt aire’. The border also includes Cardamine pratensis (Lady’s Smock), Sanicula europaea (Sanicle), Stellaria holostea (Stitchwort), Stachys officinalis (Betony) and Anagallis arvensis (Scarlet Pimpernel).

Plants from Australasia and South Africa, including Muehlenbeckia astonii, an endangered coastal shrub from New Zealand, and Eucomis comosa (Pineapple flower) from the eastern Cape.

At the heart of the garden is the pond supporting native wetland plants and providing a home for frogs and newts. Sky blue Myosotis scorpioides (Water forget-me-not) flowers throughout the summer as well as Bogbean, Veronica beccabunga (Brooklime) and Caltha Palustris (Marsh Marigold).

In March 2015 we opened London’s first Moss Trail, featuring 12 different sorts of moss. A leaflet and map detailing the mosses is available.

In 2018 we were proud to obtain a grant from Botanic Gardens Conservation International (BCGI) to develop a partnership with the Botanic Garden of Rome. We visited each other’s gardens in spring 2018. A lot was learnt on both sides and we remain in contact to share knowledge. See the blog for more details.

Photo credits: Cath Pearson and Caroline Pankhurst, both of SLBI.